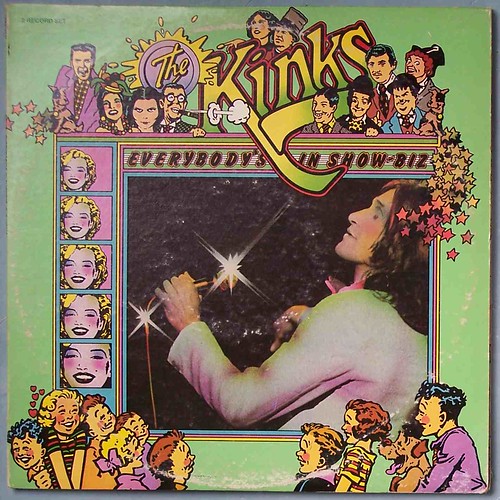 flickr photo shared by cdrummbks under a Creative Commons ( BY ) license

After the ebb of 1971 and Muswell Hillbillies I was not really looking forward to 1972. I knew there wouldn’t be competition for the top spot, but what would follow? In 1972 they released Everybody’s in Show-Biz which was a double album: one disc of original tunes and one of a live performance featuring recent stuff. I am considering both discs for this. That’s more a reflection of how this album is kind of a dud in my mind than anything else. With that, here’s the list:

“Celluloid Heroes” is one of those special songs that seems to rise above its pretensions. It captures the melancholy of fame quite nicely. It’s also an optimal balance of Ray Davies’ wit and sentimentality that sometimes can veer into trite and annoying. This song is just lovely.

“Here Comes Yet Another Day” has a road trip feel to it. It’s rambling yet going places. The organ intro belies the hook. It’s an overlooked song (like this album) that is fairly tight and rolling despite the American affectations. I actually like the horns.

We have another country rock jamble in “You Don’t Know My Name”. There’s something about Dave Davies’ voice that really suits this song. The hippie flute interlude is nice and unexpected.

“Sitting In My Hotel” is a straightforward, earnest, rock ballad. Starting with the solo piano, then kicking in the rest. It’s repetitive but comforting despite the melancholy. It’s a very pleasant song, though kind of cliche.

The resonator guitar kicks off “Motorway” kind of like “Powerman”, but not so ominous. Instead of a heavy rock song we get a picking country-esque song about driving on the motorway. It’s pretty cheesy, but also jaunty and pleasant. I can’t hate.

“Look A Little On The Sunny Side” is another throwback to the old English beer hall songs. It’s kind of drunken and OK.

Now we have a live version of “Alcohol” – I wasn’t a huge fan of it on Muswell Hillbillies because the lyrics aren’t great and it’s painfully obvious. The drunken looseness of the live version works though, much more than the studio version.

“Hot Potatoes” is another country rock track that’s laid back about something as mundane as domestic strife and simple meals. It’s repetitive and easy to sing along, so kind of catchy, but not great.

“Supersonic Rocket Ship” is precious, but also doesn’t really work. It remind me of “Apeman” in the novelty factor, (it has steel drums!) but the song doesn’t really go anywhere.

This live version of “Brainwashed” is tight and much faster than the version on Arthur. It’s pretty good.