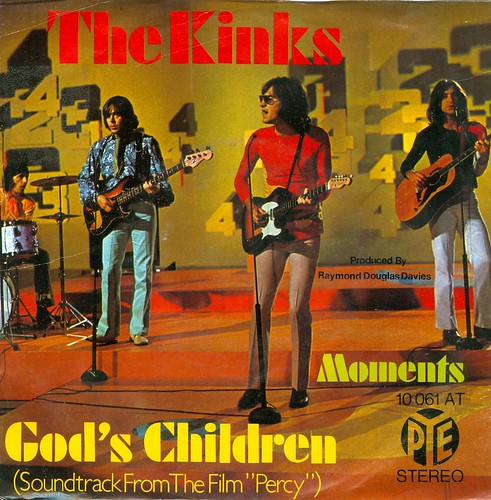 We all knew this would happen. I’d hit a year in the Kinks discography where it was more work to endure than a pleasure to listen to. I thought that year might have been 1972, but alas it was 1971. They released two albums that year – the often forgotten soundtrack Percy and the trite Muswell Hillbillies. My parents own both albums. I remember listening to Percy on my own volition. I remember my parents had a fondness for Muswell Hillbillies, perhaps because it was the album that was around when they were courting. When I listened to it for this project I asked my mom what was up with that and she confessed she doesn’t really like it – it’s a dad thing. That explains why I kind of hated it. So anyhow, here’s the list.

“God’s Children” starts with a really lovely guitar riff and then some soft, sincere vocals. It’s a tender song about our place in the world. You wouldn’t know it was about the hubris of progress and science as told through the story of a penis transplant. This is one of my all time favourite Kinks’ songs and showed up at no. 3 on my original list. This would be the top song regardless of anything else in 1971.

“Oklahoma U.S.A.” is another tender song. Lyrically, Ray Davies tries to put himself in the heart of America, with a tedious melancholy and faded dreams. This is the kind of wistful song Ray Davies is the master of, and it has the right balance of sentiment and kitsch.

I can’t say I actually like “20th Century Man” but I can respect it. It’s a good example of Ray Davies’ song writing that’s too literal and too derivative. The resonator guitar is back and it’s trying to be Delta blues, but it’s just OK until you get to the vaguely medieval sounding bridge, which leads to the rock. This song could stand to miss out on the first half basically.

“Dreams” is a very traditional song of reaching akin to “David Watts” from Percy, but I think it’s a pretty decent example of semi-orchestral early 70s rock production. The song is a gem.

The best thing about “Muswell Hillbillies” is the bright guitar lick in the intro. It’s got that 70s country rock mid-tempo sing along feel that I’m just not a fan of. The lyrics are kind of entertaining in that they evoke the feelings of Tennessee or Kentucky, but in London. Only it’s also hokey and I’d rather just listen to some Buck Owens. The guitars though… really nice.

“Complicated Life” is a sloppy Southern rock dirge with some slide guitar. Lyrically I think Ray Davies does some interesting things, but I also think this is too hokey. I like the sing-along chorus. I also feel drunk listening to it.

Another song from Percy is “Moments”, which is kind of an odd song with a really nice climb going into the chorus-like thing. I don’t know… I appreciate the off-kilter time, the strings, minimal beat, and how it meanders.

“The Way Love Used To Be” is also from Percy. It’s a slow, dark song  that starts almost with a whisper. It’s a good song to look out a window onto a rainy, empty street. Feel lonely. Love is over.

We already know by this point how much the Kinks like traditional music hall music – and this is another song in that vein. It’s cute. It’s not as country as much of Muswell Hillbillies, which is most likely why I don’t mind it. It’s too corny to be higher on the list.

The last song is “Lavender Lane”. This is like what a Mungo Jerry song should aspire to be. That’s definitely damning with faint praise.

That’s the list. “Skin and Bone” barely made it but I was also scraping the bottom of the barrel for this. Even writing this was a chore. 1972 will be easier since there’s just Everybody’s In Show-Biz.