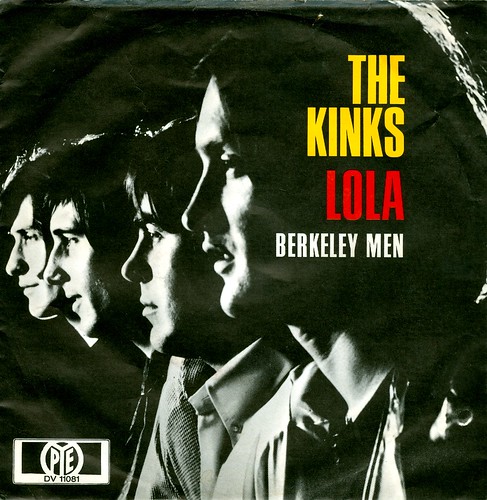 1970 might be the last great year for the Kinks, but I never really listened to Lola Versus Powerman and The Moneygoround, Part One that much. I mean, I knew the hits but the album as a whole wasn’t etched into my psyche like Village Green Preservation Society or Arthur. Listening to this album a bunch of times to make this list was a pleasurable exercise. I don’t think there’s anything really surprising or controversial here. Overall I think the whole album is cohesive, but there are some songs that are kind of clunky and slavish to the theme. Other songs totally transcend it. Clearly Ray Davies was pretty bitter about the industry by this point. So with that note, here’s the list!

I really did not want to put “Lola” at the top of the list because it’s probably their most iconic song besides “You Really Got Me”. Weird Al even covered it! It’s a song like that. It’s also really good. The opening chords on the resonator guitar immediately hook you to the song, and nothing else sounds quite like it. (Just like “You Really Got Me”.) The chorus is easy to sing along to drunkenly, kind of like “Hey Jude”. Nowadays, I do struggle with whether or not the lyrics are transphobic, but I take comfort in how positive the song ends. It’s modern love. It’s also a well recorded and arranged hit. The bass line, whoa. Yeah, I get why everybody loves it.

“This Time Tomorrow” is such a lovely song, despite the airplane noises mixed throughout it. I think it was used in some Wes Anderson film which I’ve yet to watch. I know it’s a song about touring specifically, but it really captures the feeling of distance and longing from travel that seems near universal. It also really uses that resonator guitar very well. It makes me maudlin as hell.

The most beautiful song on the list is “A Long Way From Home”. Its measured wistfulness keeps it tasteful without being overly sentimental. It’s balanced and poignant. I don’t think I have the vocabulary to adequately describe it, but it haunts me.

“Strangers” is a great song sung by Dave Davies. Paste magazine loves it. I really like it. It’s so stripped down and kind of raw in a really lovely and vulnerable way. They try to work out the point of life, and it seems like it’s all about the journey.

The surprise on this list to me was “Denmark Street”. It’s about the street where the music publishing industry in the UK was centered for a long time. Despite being painfully obvious about the music business, the music carries the song. It’s one of the most bombastic and poppy songs on the album but it doesn’t sound too trite or like a novelty song.

“Powerman” starts with some ominous plucking of the resonator guitar and then the guitar riffs kick in. Lyrically the song is OK but not great. It stands out though for being a pretty hard rocking song with good riffs, but it’s not quite as good as other bands in the day like Black Sabbath. (Really though, who is?) It adds a lot of weight to the album.

“Get Back In Line” is one of those songs that really grows on you. It’s a working man’s song with a country twinge that kind of sounds like to could be on Muswell Hillbillies. Anyhow, this song is well constructed and well rounded and I think we should listen to it on Labor Day.

I struggled with “The Moneygoround” because it’s so short and a throwback to English beer halls. The bouncy piano is a nice juxtaposition to the cynical lyrics. Everybody gets their cut. It’s a really good little thing.

“Apeman” is a total novelty song. I kind of hate it but it’s also well crafted and perfectly cheesy. I don’t actively like listening to this song much though I do like this performance of theirs from Top of the Pops. It’s like Mungo Jerry, only good.

The last song on the list is “Rats” – the only Dave Davies penned song on the list (and of the year). It’s also rocking and has some of Dave’s signature guitar chords. The lyrics are kind of stupid though, so I like it but I don’t love it.

That’s the list! I dropped off some dumb ass songs like “Top of the Pops” or “The Contenders.” Also not on the list is the UK B-side to “Lola”, “Berkeley Mews”. It’s a fine song but was originally recorded in 1968 and was supposed to be on Village Green Preservation Society but didn’t make the cut. It’s OK and I like it, but it didn’t make the cut in 1970 or 1968.