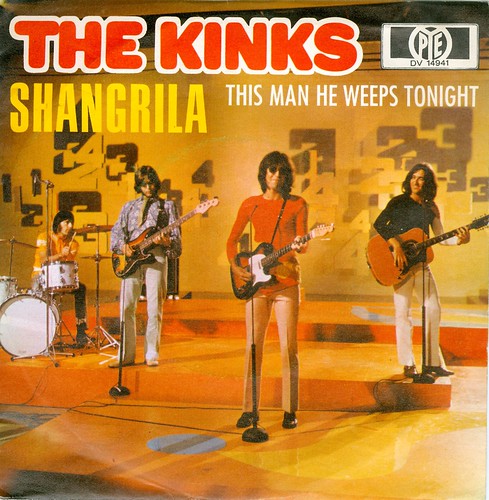 This is probably my most controversial Kinks ranking yet. 1969 was perhaps the apex of the Kinks discography with the release of Arthur (Or The Decline And Fall Of The British Empire) – their most cohesive and fully realized album that had a proper balance of creativity and grit. It kind of hurt to pick the album apart, but it also made me re-evaluate my relationship with it, getting past childhood nostalgia of my mom singing “Victoria” to me at the top of her lungs.

Putting “Shangri-La” at the top is an obvious choice. Structurally and musically, the song is complex and almost operatic. From beginning to end it really feels like you’re observing the rise of suburban consumerism, but not in an entirely dismissive way. Lyrically, this is some of Ray Davies’ finest work. It’s an anthem for a generation.

“Some Mother’s Son” might not be the most popular or well regarded song, but I think they really achieved something with it. Similar to “Shangri-La”, this song starts softly and grows into a flourish, but instead of the horrors of keeping up with the Joneses, it’s the horrors of World War I. Every time I listen to this song I feel on the verge of tears, thinking of young Englishmen laying in trenches and field while their mothers at home try to keep their memories intact. It’s sentimental enough to be one of the great anti-war songs without being ham-fisted and preachy.

“King Kong” was the B-side to “Plastic Man” (which didn’t make the cut). It’s a silly song about a bomb but it’s also one of the most hard rocking songs they ever recorded, well before Dave went pseudo-metal. This song needs to be played very loud.

“Mindless Child of Motherhood” was the B-side to “Drivin'” (another song that didn’t make the cut). It was originally supposed to be on Dave Davies’ aborted solo album. The lyrics are kind of dumb, I’ll admit that. The music though… oh the guitar riff in the beginning and the arpeggiated part at the are great.

Putting “Victoria” fifth seems sacrilegious but I think the song is good but not that great. The guitars are iconic and perfectly recorded. The melody is hard not to sing along with. I guess lyrically it falls apart for me though… maybe because I am such a staunch republican and despise the thought of the monarchy? Maybe also that I now see the expansive  British Empire as not a great thing. It’s hard for me to not feel a swell of emotion when this song comes on, but it’s not a weird mix of wistfulness and loathing. I know my mom almost named me Victoria after this song.

The title track “Arthur” is sort of a dumb song, but it is a nice summation of the life of the man the album is about. It’s definitely trying to be country (which they will take into more extremes in later year). I think Ray and Dave do a nice job of singing about a guy trying to get buy in a messed up world. I also think the guitars have a great tone. “Somebody loves you, don’t you know it.”

The most sentimental and maudlin song on Arthur is “Young and Innocent Days”. It’s kind of trite, but it does an excellent job of capturing the bittersweet emotions of time passing and thinking back about how great used to be. It’s like an extension of “Days” only total resignation to the past. I also don’t think I hate any Kinks song with a harpsichord. I think this is one of the most dynamic and well recorded songs on the album. (Play this song when I die.)

“Yes Sir, No Sir” is a song I always place in my head with the Jam’s “Little Boy Soldiers”. The only things they have in common are being illustrative about English soldiers written by white Englishmen. I think this song is good for its structure and complexity, as well as its lyrics. It’s just a little bit too obvious of a song and doesn’t capture the emotional hell of war quite as well as “Some Mother’s Son”.

I don’t really have much to say about “Nothing To Say”. It has a piano and is vaguely reminiscent of a Beatles song. It does talk about the transition of children negotiating adult relationships with their parents, which is kind of interesting. It’s also got that kind of weird Ray Davies deep throaty voice which is always fun. And horns.

Lyrically “Brainwashed” is pretty dumb but it’s saved by the guitar riff. If the guitars had a bit more overdrive or distortion this song would probably a bit higher. Basically, the bridge makes this song good.

There are some big songs missing on this list I know. “Drivin'” is popular but I think it’s too trite and doesn’t stand up well. “Australia” is long and rambling and just descends into a wank session, which is not the Kinks’ strong suit. “Mr. Churchill Says” is goofy but did help me learn a lot of British politicians names. “She Bought A Hat Like Princess Marina” is a good attempt at a kind of English beer hall song, but it also didn’t age well. “Plastic Man” is a decent bit of social commentary but it’s also very gimmicky. The only song I wish I could put on here that didn’t make it is Dave’s other great song of the year – “This Man He Weeps Tonight”. I love it, but it just doesn’t seem like it should knock off “Brainwashed”.

1970 will be the last hard year probably. Lola Versus Powerman And the Moneygoround, Part One is the logical place for the Kinks to go in many ways but it also seems like Icarus flying too close to the sun… I’ll save that for later. I know for me at least, 1969 is where the Kinks peaked but that’s also true for most things.