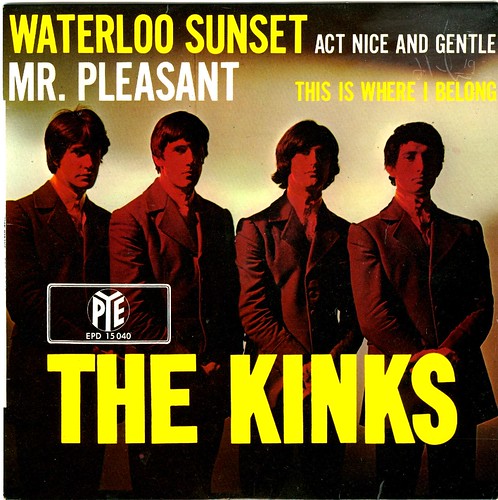 I knew making this list would be difficult and controversial with myself, let alone anybody who might read this. The 1967 output of the Kinks was focused, transitional, and solid. When I listened to the singles and Something Else a few times through to make my initial list of songs to consider I only cut 3 of the 21 songs in consideration; “Mr. Pleasant”, “No Return”, and “Afternoon Tea”. After several more listens I conservatively selected 9 songs that had to be on the list, which caused me to obsess over the ones on the edge of 10. I’m still flip flopping over it in my heart, but this list reflects a mix of emotion, opinion, nostalgia, and respect. It goes:

I strongly considered not putting “Waterloo Sunset” at the top because that’s so obvious. The song is overplayed and used in too many melancholic montages. It’s ubiquitous for a reason though. I’m not one for lyrics, but these stand apart as some of Ray Davies’ best. The guitar line, which plays off the main melody nicely throughout the song, is a lovely counterpoint. The whole thing seems to be stuck in my brain and probably in my DNA for a reason, so I can’t fight it just to be contrarian. Accept it, this is one of the best songs in the canon.

Putting “Love Me Till The Sun Shines” this high might be provocative for a number of reasons; it was originally a b-side to Dave Davies’ solo single “Death of a Clown”, the lyrics are kind of cheesy, it’s mostly still talked about thanks to long tail anoraks. Well, we sometimes resurrect gems. Lyrically this is a realistic and sweet love song. Musically, the guitar riff is one of the best of this year and you can’t ignore it.

“Autumn Almanac” is a perennial favourite of Kinks fans who appreciate a little weirdness but fantastic lyrics. It’s often mentioned along other intellectual efforts of scene making such as “Days” (which was released in 1968). The song is a bit off kilter, which makes it enjoyable.

I often forget that “David Watts” was released in 1967. It seems like it was a punk song because of its snotty aggression. It kicks off the album with the count in, “nice and smooth”. Now it’s been covered to death but we have to remember it was ahead of its time and respect Ray Davies’ effort to call out private school mugs. Weller wishes he had such craftsmanship.

“This Is Where I Belong” is another Dylan-esque song that overcomes the obvious feelings of alienation and awkwardness and resonates as a song a lot of people can relate to. This would have been the big hit for many lesser bands, but because the Kinks had such a robust and stellar catalog this is often overlooked.

The harpsichord is back with “Two Sisters”, which is another observational tale of family and Englishness. Ray Davies provides a portrait of very mundane sibling rivalry (something he was very familiar with), that goes beyond class problems. Maybe it’s because I’m older, but this song speaks to me. The strings, the way the song just meanders and ends with hums, it’s an oddity but lovely.

We have another Dave Davies song with “Susannah’s Still Alive” (it was his second solo single). There arrangement is a bit odd and kind of tinny with a harmonica in the mix and not much bass. The piano run really anchors the song. In some ways it sounds like a vaudevillian rock song.

Half the time when I hear “Situation Vacant” it sounds like it’s an out take from Village Green Preservation Society. If that’s not foreshadowing of things to come, I don’t know what is. The beat, the off key verses that softly resolve into something like a verse, it’s a well constructed song that has a very old time English beer hall feeling. The false ending re-start is also unexpected. This is a really good song that deserves more attention.

I almost didn’t put “Death of a Clown” on the list. I hated this song at times because it’s over the top with the drinking and misery. It’s amusing on one level until you meet people who this song speaks to lyrically. I just can’t take it seriously! (I wonder if my brother still says this is his favourite Kinks song to piss people off. I never believed him.) That said, there is something remarkable about this song. The imagery works. The instrumentation works. The whole thing is quirky but effective and while I wouldn’t say it’s Dave Davies’ best effort, there’s a reason people know the song.

“Lazy Old Sun” starts off lethargically and a bit warped, conveying the feeling of napping out in the sun. It’s kind of dated but I think it really works as a freak out hippy song. It’s fairly contained actually, and I really enjoy it. Probably because of the maracas.

Some of the songs that didn’t quite make the cut but almost did included “Harry Rag”, but it’s a little too novelty compared to some of the other songs. I get it… it’s Cockney rhyming slang! “Tin Soldier Man” is also a good song that didn’t quite stand up. “End Of The Season” is a really nice jazz pop song.

Stay tuned for 1968. It’s going to be difficult to tear apart one of the top albums of my childhood (and my being).

Bill Monroe - On the Old Kentucky Shore
6 hours ago