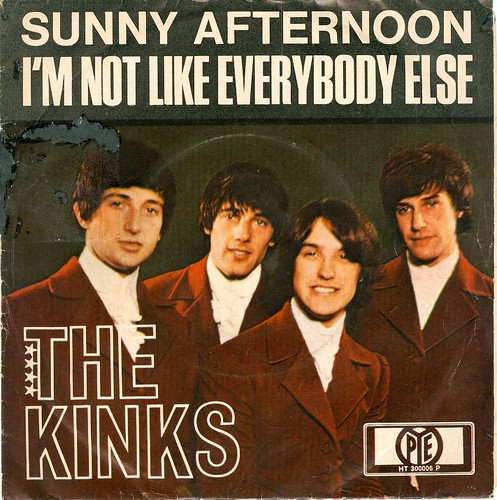 Alright, let’s talk about 1966 Kinks. It was a big year for Ray Davies despite Arsenal finishing 14th in the football league: England won the World Cup and the Kinks released Face to Face. (“Sunny Afternoon” was released in early June, just in time for the World Cup in a way…) Ranking the Kinks’ recordings of 1966 was more difficult than 1965 because there were fewer songs, but they were more focused. Let’s try this fool’s errand.

It seems a little sacrilegious to put a song sung by Dave Davies in at the top spot, but “I’m Not Like Everybody Else” is one of the best songs about alienation ever recorded. It’s an anthem for weird kids who feel disconnected from those around them. It’s such a B-side gem.

The opening chords of “Dedicated Follower of Fashion” are warming and comforting like a velvet jacket. Nothing else sounds like it. This song might have been number one if I were in a different mood. Ray Davies’ lyrics are witty without being too trite. It really sets to mood of the Carnabitian army.

It’s hard not to talk about opening hooks without mentioning the downward chord progression of “Sunny Afternoon.” They set the mood of the malaise of taxes and first world problems. It’s jaunty and dark. There’s definitely a reason it’s captured people’s imaginations. I also like it because he rhymes “car” and “pa”.

“Rosie Won’t You Please Come Home” might be my most left field song on this list, and I really struggled to place it higher. It’s kind of a dirge, but I think it’s got some really interesting stuff going on in rhythm and the structure. The balance between the baroque pop and the bluesy off-key chorus is unique. And the blend of the bass and the guitar… oh my. It’s about their sister who moved to Australia.

“I’ll Remember” is totally a cute pop song, but it’s just so well done. It really captures some feelings of love. The intro with the bass, the drum beat, and the sharp guitar line. It’s a delight.

“Dead End Street” is such a typical Ray Davies observational song about English life. It’s a sign of what’s to come in the next few years. It’s definitely about Muswell Hill.

We have more harpsichord with “Session Man”, a song about Nicky Hopkins. Some of the rhymes are so forced they’re almost charming, but this is a good bit of cynicism about the music industry. It’s also got a good beat.

“Dandy” has to be one of the most trite sounding pop songs Ray Davies ever wrote, which explains why Herman’s Hermits had a hit with it. The lyrics are quite clever and it gets stuck in your head easily.

I don’t know why I love the song “Party Line” other than its cute affectation for outdated technology most people won’t understand today. It’s such an ordinary song in that way, but it’s also got the old R&B beat. The phone ringing in the intro and the man speaking are kind of a novelty, but it just shows how they were really reaching with recording and branching out in new ways.

This list ends with the mellow, sweet ballad of “Too Much On My Mind.” It could have easily been Rolling Stones-esque “Holiday in Waikiki”, or the song about excess “House in the Country”, or even the slow “You’re Looking Fine”. Maybe it’s because I’m older now and I often lose sleep because of matters weighing on my mind? Maybe it’s because I’m a sucker for baroque Ray Davies? I don’t know, but I think this song deserve more attention.

So that’s 1966. It’s a good year as far as The Kinks go. (Arsenal would go on to win the double in 66-67, which might foreshadow the heights The Kinks achieved in 1967? That’s probably not true.) It’s only getting harder from here.