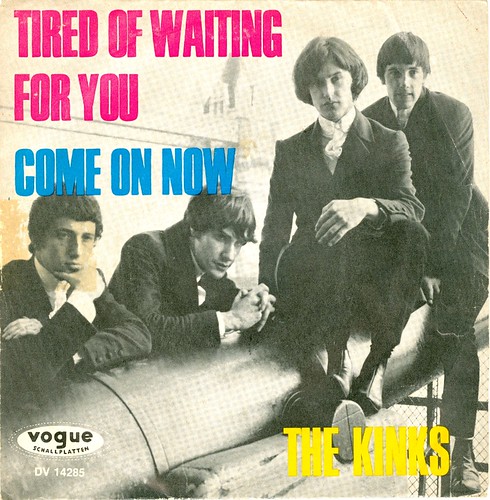 It’s been over a year since the first installment of this project, but I’m gonna finish it before the end of the year. I promise! As a refresher: I am listening to the entire Kinks discography year by year to figure out my Top 10 by year, and then hopefully figure out my overall Top 10 and the best year of the Kinks recorded output. Simple (and obsessive), no?

1965 was a more prolific year for the Kinks than 1964 – two albums and two EPs – which made this year a bit more difficult. I listened to Kinda Kinks and The Kinks Kontroversy (and the singles) twice through making notes of songs that stuck out for a re-listen. That list had 29 songs. So I culled it and listened through again marking out the ones that just had to be in the Top 10 somehow, which left 9 standouts and I slid in the one that was on the cusp to round it out. I tried to keep many things in mind when I ranked them: music, lyrics, catchiness, is it iconic, should it be iconic? So here’s my list for 1965:

Unlike 1964, there wasn’t the toss up of hits in 1965. “Tired of Waiting For You” stands out for good reason. It was the hit! The lyrics are classically cynical, but the really hook for me is the rhythm guitar. I just love the tone. It’s hard to ignore.

“Till The End Of The Day” is a stomper, very much like “Your Really Got Me” and the like. It’s in that vein that all my favourite bands tap, but it’s so well recorded and mixed it’s just classic. “Set Me Free” is just behind it with an even crunchier guitar tone, but it’s not as danceable which is why it’s third.

“Come On Now” is Dave Davies first appearance on these lists, and it’s kind of an attempt at a Kinks does Motown (hence the backup singers). The guitar riff and the vocals make this a fun one to dance to and it stands out as a great pop song.

You can’t really dance to “A Well Respected Man”. It foreshadows the future of Ray Davies observational songwriting about English life. (Lots more about that to come in later years.)

“Something Better Beginning” is a great melancholic song, not least because The Honeycombs covered it. I think we’ve all been there in that zone of uncertainty and Ray Davies captures it. It’s just kind of a simple pop song when he’s clearly moving beyond that.

Something about the opening of “Where Have All The Good Times Gone?” reminds me of when Dylan went electric, only the lyrics aren’t quite so pretentious and Dave Davies has a great guitar tone. This is a good song of nostalgia and I have fond memories of my mom singing it to me.

“Ring The Bells” might be one of the lesser known songs on this list, appearing on The Kinks Kontroversy so it’s kind of a deep cut. I think this is another early song of observation and could have easily been on some later albums. The balance of melancholy and wistfulness is beautiful and this song deserves a spin.

“World Keeps Going Round” is very much a mid-sixties song about the pace of progress. I think it has an interesting beat and Ray Davies captures the mix of uncertainty and fatalism quite will with this song.

“Such A Shame” was on the Kwyet Kinks EP that came out in the fall of 1965. It’s a slow, dark pop song that really embodies Ray Davies’ brand of sad. There’s not much too the song, but I think it’s interesting a little lyrically and I love the guitar tone.

I did leave off a lot of my favourite pop songs, like “Ev’rybody’s Gonna Be Happy” and “Who’ll Be Next In Line”, but this is a tight list and I think some of the lesser known songs were better as pop songs go. Same with the dirge “See My Friends”.

Stay tuned for 1966, which was a lot more difficult song for song.

Bill Monroe - On the Old Kentucky Shore
8 hours ago